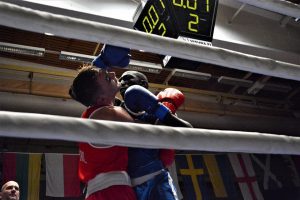 Ireland recorded five victories in the semi-finals of the Tammer Elite multi-nations in Tampere, Finland this afternoon.

George Bates, Tony Browne, Michael Nevin, Kieran Molloy and Dean Gardiner upgraded their guaranteed bronze to at least silver after having their hands raised in victory at the 38th edition of the tournament.

The five will be back in action in Sunday’s finals at the 23-nation competition.

Ireland has recorded 12 wins from 15 bouts so far in Tampere.

Myles Casey and Wayne Kelly bowed out today. Kelly was edged on a 3-2 split after a fiery light-welter encounter with England’s Conor Loftus, while Kiril Asanasev was beaten on a 4-1 split by Croatia’s 2014 World Youth finalist Toni Filipi.