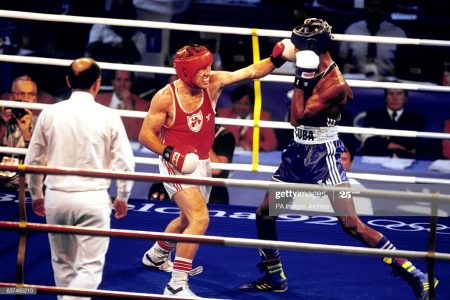 Christmas came early for Ireland in 1990 versus a top England side at the National Stadium.

Carruth, who won World Elite bronze in 1989 in Moscow, beat Paul Burns on a unanimous decision less than two years out from ending Ireland’s long wait for an Olympic (boxing) gold medal at Barcelona 1992, and Joyce had his hand raised in triumph by the same margin.

Liverpool-native Reed claimed bronze at Barcelona 1992 and won a World title in the pro ranks. Walsh and the Merseysider took counts after being dropped and left occupying large areas of floor space in the first and third rounds of a fiery battle at the Stadium.

Lawlor and Galvin took the early route to victory versus Marlon Jones and Eddie Stuart 30 years ago.