The Irish quartet all won their quarter-finals today and evening and will be aiming to upgrade to at least silver tomorrow. 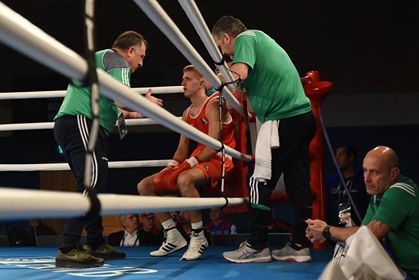 Dublin heavyweight Browne secured Ireland’s first medal of the 21-nation tournament after Zhiabao Wang’s quit – his corner threw in the towel – at the start of the second round earlier today.

“His corner retired him. I felt comfortable in there and look forward to putting in another performance for Team Ireland here tomorrow,” said Browne who was 10-9 ahead on all five cards at the end of the first.

McNaul and Walsh outpointed Mongolian pair Delgerkhnga Khongorzul and Mungustsetseg Enkhjargal in the feather and fly class to advance to the last four.

Walsh clearly hurt Khongorzul with a body shot in the second frame and rocked the Asian with a big right hook to the head in the third in a dominant performance from the EU champion.

But Kurt Walker, also an EU titlist, admitted he began too sluggishly versus Russian feather Albert Batyrgaziev, while Irish welters Christina Desmond and Grainne Walsh were beaten on unanimous and split verdicts early this morning.

”I started off too slow, I came well into it in the second and the third. The first round left me down. I’m happy to get two quality fights here. It will improve me for the European Games,” said Walker.

Emmett Brennan finished out the third round on the front foot against Gleb Bakshi but the Russian middleweight had enough in the bank to advance to the 75kg semi-finals.

Bernard Dunne, IABA High-Performance Director, hailed the performances of all the Irish boxers in action on a marathon day of boxing which began at 9am this morning and finishes at approximately 11pm tonight.

All images courtesy of Margit Kincses.