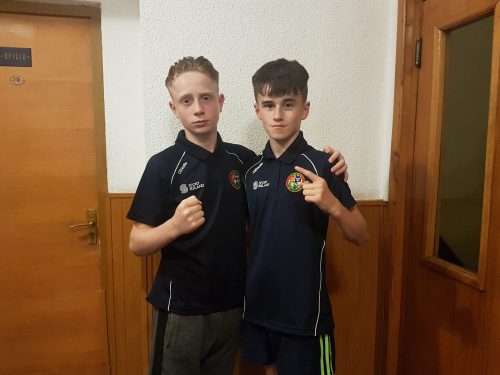 Donoghue, in action on the first bout of the program, and Lewis, between the ropes in the last fight on the roster, had their hands raised in triumph. In between, Charles and Donovan scored impressive victories.

Donoghue show his class in an open and entertaining contest with England’s Jack Dryden, the lightest boxer on the Irish panel finding the target with a succession of counter punches against his talented opponent.

Charles forced Vadim Yutonov of Moldova into standing counts in the second and third rounds and the ref called a halt after the Moldovan was rocked again by the dominant young Irishman with less than 30 seconds to go.

Galway southpaw Donovan earned a unanimous decision over Pavel Bozovic of Montenegro, the Irish flyweight repeatedly finding the target with backhands – and a few rights thrown into the bargain – to take all three rounds.

Lewis completed a fine day for Irish boxing with a first round stoppage of Jure Bratovich. The Croat took a standing count inside the first minute and his corner threw in the towel after he went down under a cluster of punches from the Ballymun BC prospect moments later.

Speaking of clusters, fifteen Irish boxers are now through to the quarter-finals in Valcea.