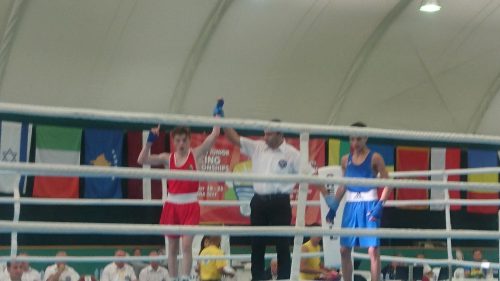 Jude Gallagher has his hand raised in victory today

Jude Gallagher progressed to the quarter-finals of the European Junior Championships in Albena, Bulgaria today.

The Two Castles BC dynamo beat Azeri pin-weight Maksud Khasmetov en route to the last-eight and his second victory in 48 hours, with Khasmetov taking a standing count in the first round following a relentless period of pressure from the eventual winner.

But there was disappointment for Myles Casey,Irish captain Brandon McCarthy, Mikey Stokes and Gavin Rafferty this afternoon.

Casey can consider himself particularly unlucky.The Limerick flyweight found the target with a barrage of lefts, with a few rights thrown into the bargain, in the second and third rounds, but the judges opted for the busy Romanian.

McCarthy lost the first across the board to English southpaw Harry Kinsella, took one of the judges with him in the second and won the third 3-2 in a bout which could have gone either way, while Stokes was involved in a tight affair with Georgian feather Bakur Chikovani, both young men having their say in all three frames.

Rafferty lost a tactical battle with Turkey’s Emir Buyukdas.The Irish middle clipped home some solid punches throughout, as did his opponent, and finished out the contest with a clean headshot, but the Turk got the decision.

Meanwhile, Patrick McCarthy is in against Russia tomorrow with at least bronze up for grabs in the light-fly class. Dean Clancy, Callum Walsh, Peter Vrinceanu and Thomas Doherty box in the last 16.