Jude Gallagher,pictured, had to settle for bronze at the World Men’s and Women’s Youth Championships in Budapest, Hungary today.

The Irish light-fly was beaten on a 4-1 split decision by Thailand’s Thitisan Panmod after a close semi-final at the Duna Arena. 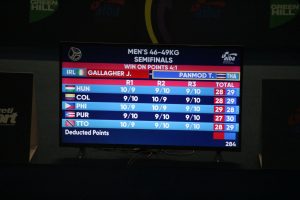 Gallagher will be taking him bronze from Hungary, Ireland’s 22nd medal at this level since Cuba 1987.

The Tyrone orthodox found the target with enough body shots – and two clean combinations – in the first round to win the frame against his industrious opponent, who received at least four cautions for dropping his head, on the unofficial cards.

The Irish captain began the second with a good right to the head, but Panmod, constantly staying close to deny the young Irishman any leverage, was bearing away on the inside for most of the stanza.

The third and final round was more or less a replica of the second with neither orthodox enjoying any sustained dominance.

Puerto Rico’s Paul Jan Rivero earned a 3-2 split over Kazakhstan’s Makhmud Sabyrkhan in the corresponding semi-final which was refereed by Ireland’s Dermot McDermott.

Today’s defeat brings Ireland’s competitive interest in the tournament to a close. Ireland were using a seven-strong male and female squad in Hungary.

“It’s been a wonderful performance by Jude and all seven of our boxers over the past week.The future of Irish boxing is looking very bright!” tweeted the Irish Embassy in Budapest.

Gallagher will be presented with his bronze medal during Thursday’s finals.The Irish squad are scheduled to arrive home at 4pm on Saturday via Dublin Airport.