The Clonmeal BC and Rathkeale BC pair clash in the super heavy decider at the National Elites at the Stadium in a repeat of the 2017 box-off which Gardiner won at the same venue.

Saturday’s finals will be broadcast by TG4.

Both men advanced from their semi-finals on unanimous decisions over Thomas Carthy and Gydis Linskyas last weekend.

Gardiner, who has boxed in the World and European Championships and the World Series of Boxing, is a highly experienced Irish international.

In fact, with the exception of World Elite titlist Kellie Harrington who meets Serbia’s Jelen Jelic in – by IABA – an international bout on the Elite finals card, Gardiner will be the longest serving Irish international between the ropes this weekend.

Keenan has also impressed on the international circuit. The Rathkeale BC stand out claimed an Elite belt in 2017 but was beaten by Gardiner in a box off that year.

The last time that Gardiner, who came within one win of qualifying for Rio 2016, lost at the National Elites was to his own Clonmel BC team-mate Con Sheehan, who has since turned pro, in the 2014 Elite final.

The defending champion will be aiming for his fourth crown at IABA HQ and is ready to roll, according to Clonmel BC coach Martin Fennessey.

”The last time he was beaten in the Elites was by Con five years ago. We know what we are up against and we give a lot of respect to Martin because he’s a champion himself.

“Dean’s pace, physical fitness and boxing are phenomenal at the moment. I think he’s now at the peak of his career and he’s very much looking forward to Saturday night.” 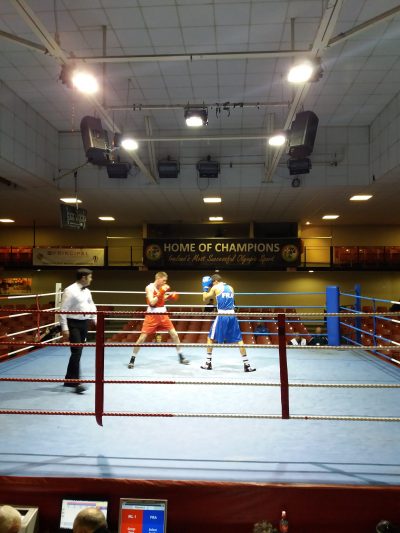 Meanwhile, in an iaba.ie “exclusive”, Antrim’s James McGivern has vowed that he’ll wear those dazzling boots again on finals night!

McGivern wore fluorescent yellow footwear borrowed from his younger brother Jack, one of Ulster’s finest young prospects, in the semi-finals.

“I will (wear the boots) indeed. I haven’t got my own pair,” laughed the Commonwealth Games medallist and Commonwealth Youth champion. “I’m feeling strong in training.”

McGivern is in against George Bates for the light-welter (63kg) title. Bates claimed the lightweight (60kg) belt but last year but that weight has been dumped by the AIBA in a reshuffle of men’s Olympic limits.

”I had to move to light welterweight which is 63kg but the transition has been quite easy. I’m feeling good and quite strong at the weight,” said Bates, a teammate of World No. 1 Harrington at the St Mary’s BC in Dublin.