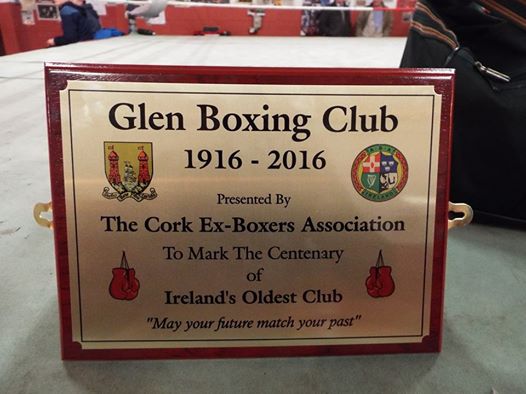 The final bell tolled on the Glen Boxing Club Centenary (1916-2016) celebrations in Cork last weekend after they met the Birmingham City BC at their 100th birthday bash at the Commons Inn on Leeside.

Founded in humble beginnings in the Rebel County in 1916 – their first clubhouse and gym was in a terraced house in Blackpool – the Glen BC has earned its place as one of the great Irish sporting institutions of our time.

Since its foundation over ten decades ago, the Centenarians have catered for all classes and creeds and has been represented by all walks of life.

Amongst its distinguished boxers were men who made the headlines in other sporting codes, including Denis O’Riordan and Tom O’Donoghue, who lined out for the 1966 Cork All-Ireland winning hurling team.

The two Glen boxers who represented Ireland at rugby were, Ernie Keeffe, who was a member of the Irish Grand Slam winning team of 1948, and Terry Moore who represented his country in the 1970s.

The great Mick Leahy also boxed out of the Glen. In 1964, Leahy beat the legendary Sugar Ray Robinson, considered by many to be the greatest pound-for-pound fighter of all time, in Glasgow.

The opposition for the the Glen BC Centenary tournament, which was presented by the Cork Ex Boxers Association,  was led by head coach and Corkman Frank O’Sullivan, MBE. 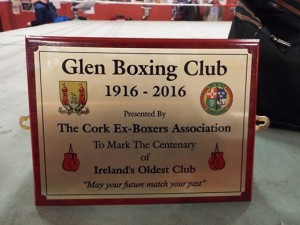 O’Sullivan, affectionately known as Sir Frank, is an internationally acclaimed boxing coach and ambassador. Born at the bottom of Shandon Street in Cork, O’Sullivan lined out for the Sunnyside BC, which celebrates its 90th birthday this year, for several years.

As an 18-year-old, he left Cork in search of employment and settled in Birmingham. O’Sullivan has been a member of the Birmingham City BC since its foundation, Five years ago, the unassuming Leesider was honoured by the Queen of England with an MBE for 40 years service to amateur boxing in his adopted city.

O’Sullivan has trained numerous champions, including Frankie Gavin who has strong Irish roots. Gavin became the first England international to claim an AIBA World Elite title in 2007 in Chicago, where Paddy Barnes qualified for the Beijing 2008 Olympics.

Michael O’Brien, President of the Cork Board, eulogised what he described as the iconic and historic contribution of the Glen BC to Cork and Irish boxing and sport, while Fergal Carruth, CEO of the IABA, hailed the club’s longevity and achievements since 1916.

Pat Ryan, President of the IABA, who attended the Centenary tournament, said: “To put the Glen Boxing Club into historical context; it was established five years after the foundation of the Irish Athletic Boxing Association in Dublin in 1911 and eight years before we send a team to the Paris 1924 Olympic Games for Ireland’s first Olympiad.”

“The Irish Athletic Boxing Association salutes the Glen Boxing Club and its enduring legacy over the last one hundred years.“

The Lord Mayor of Cork, Cllr. Des Cahill, said: “The enduring legacy of the Glen Boxing Club is its very endurance, a fortitude which has seen the club keep its doors open to the community for a century. Just over one hundred years ago, from humble beginnings in Blackpool, the founders of this club lit a sporting light on Leeside. It is a light which has never gone out.”