The Dubliner, who boxes out of the St Mary’s BC, beat Thailand’s Sudaporn Seesondee on a 3-2 split decision today to top the lightweight podium in New Delhi, India.

Harrington, a silver medallist at light welter at the 2016 World Elites, is a two-weight World medallist. 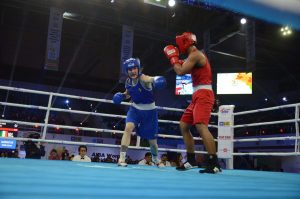 Today’s victory sees the lightweight title return to Ireland for a 6th time since 2006. Ireland (6) Canada (2), France and Russia are the only nations to hold the 60kg belt.

“It’s always been my dream to become a World champion. The support from home has been phenomenal as well, I would like to thank everyone for their support,” said the new world champion after her fifth win in New Delhi.

The Dubliner was the first Irish boxer into the ring in New Delhi on Friday week last and she was the last Irish boxer out of the ring today – with a gold medal.

The Irish squad are due to arrive home via Dublin Airport at 4pm tomorrow (Terminal 1). All media are invited to Sunday’s homecoming.

(Images, courtesy of Tibor, of Harrington in action)