Kellie Harrington has her hand raised in victory today

George Bates had to settle for a top-eight finish at the Strandja multi-nations in Sofia, Bulgaria today.

The Dubliner lost on points to Shiva Thapa despite flooring the India light-welter for a count with a sweet left hook in the second round of a fiery 63kg battle.

Dublin’s Kellie Harrington and Roscommon’s Aoife O’Rourke are guaranteed at least bronze at the 71st edition of the tournament.

Harrington, in her second fight back since injuring her hand at the European Games last June, earned a unanimous decision and O’Rourke advanced on a split verdict.

Earlier, Ceire Smith and Michaela Walsh bowed out at the last eight stages after being on the wrong end of unanimous and split verdicts to Virginia Fuchs of the USA and India’s Sonia Lather.

Big performances from both Irishwomen. 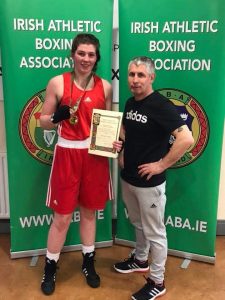 Cork welter Christina Desmond was withdrawn for her quarter-final with Oshae Jones of the USA after picking up a slight hand injury in her win over Beatriz Soares of Brazil on Tuesday.

Meanwhile, Kurt Walker, the current European champion, was surprisingly adjudged to have lost to Ukraine’s Mykola Buysenko today. The Antrim feather was outstanding in all three rounds of an up-tempo 57kg contest.

“She was sharp and very cute. It was a good contest, she said.

“I think my tactics from Zaur (Zaur Antia, Irish head coach) were perfect but I certainly need to implement them better. I’ll be going home with specifics to work and improve on.

“This has been a great tournament with three good contests under my belt which I will be building on the busy year ahead.”

Harrington and O’Rourke will be back between the ropes tomorrow boxing for places in Saturday’s finals.

(Fixtures to be confirmed)