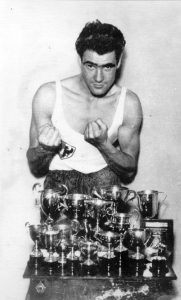 The IABA extends its deep condolences to the Gillen family following the death of Michael “Chick” Gillen.

The late Mr Gillen, a seven-time Connacht champion, was one of the great stalwarts of Galway and Irish boxing and trained many champions, including Atlanta 1996 Olympian Francis Barrett, out of the Olympic BC in Galway.

John Mongan, Secretary of the Olympic BC and a European R&J who training under the late Mr Gillen, extended his deepest sympathies to Maureen Gillen and extended family.

The Olympic BC said that Galway boxing had lost one of its legends.

“It’s with great sadness we wish to inform the passing of club founder and Honorary President Michael ‘Chick’ Gillen.

“Chick founded the Olympic Boxing Club back in the 60’s with him overseeing National Glory for the Club and most notable a representative at the 1996 Atlanta Olympic Games in Francis Barrett.

“Chick the Barber had always a story or a yarn or two to tell and will be widely missed in Galway City, County and beyond.

“Galway boxing has lost another one of its greats.”

May he rest in eternal peace.