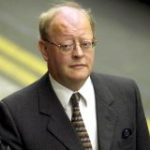 The IABA extends its deep sympathies to the Lynch family following the death of Dr John Lynch.

A big servant and supporter of Irish boxing, he was a well-known figure in Irish business and public service and led several State organisations.

May he rest in peace.