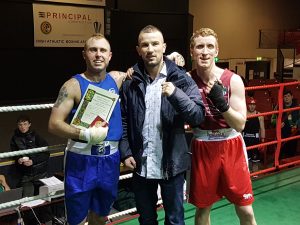 The IATBA Championships concluded today (March 17) at the home of Irish boxing – the National Boxing Stadium. Twenty four contests were decided and a great day of excitement was had as many new entrants to the sport of boxing got a taste of finals day while some ‘old timers’ just turned up for another day at the office!

Danielle Keaney (ITS) got the action underway and she didn’t wait long in the ring as she ended the contest early in the second round against Chloe Healy (CIT) in the Novice 60KG division. 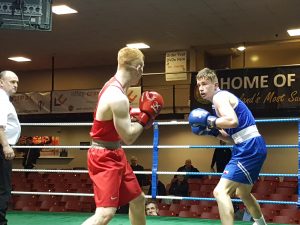 Cillian O’Donoghue (UCD) took a unanimous decision over Ben Brogan (GMIT) in the 64KG division. In the 71KG final, Christopher O’Neill (DKIT) won unanimously against Daniel McCarthy (UL) in a hard hitting contest. Both boxers left it all in the ring and unfortunately there could only be one winner!

In the 75KG final, Zana Palani (ITTD) took a split decision win against Jean Pierre Kaluena (OFIF) in another hard hitting contest. Both boxers landed shots which caused their opponent trouble but in the end, Palani got the nod in a highly exciting contest.

The 81KG final saw Eoin Carolan (TCD) take a split decision win against Rudolfus Nemickas (DCU). Carolan had three exciting bouts in this division and was tested in this final by the DCU stalwart. The early rounds went in favour of the Trinity student but Nemicikas came back strong in the last but left it a little late to take the title.

86KG saw Paul Barathay (CIT) win against Jordan Doyle in round 2 as an injury to Doyle caused this bout to be waved off. Up to the injury, it was an evenly contested bout, but Barathay won’t mind, as he is now the 86KG Champion of Ireland! 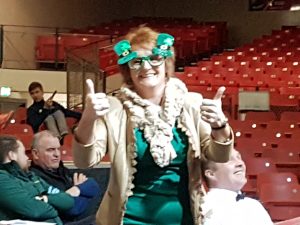 The 91KG final saw Frank Lowe (MCB) take a unanimous decision over Dan Noonan (UL). Noonan was the taller boxer and started much better but the shorter man Lowe eased himself into the contest and eventually did enough to impress all the judges to take his first Irish Title.

The Senior Novice boxers were next in and the 60KG final saw Daniel Glavin (CIT) take a split decision win over Eoin Meaney (UL). This contest was in the melting pot until the final bell and the judges had a very difficult job to split the boxers. Jack Dunne (NCI) was next up in the 64KG final against John Atling (TCD) and he stopped his opponent in the first round to seal his Irish title. If Dunne keeps progressing, he will cause all sorts of problems in the Intermediate division next time out!

In the 67KG final, Martin Tolan took the first title of 2018 for Belfast Metropolitan College when he took a unanimous decision over Richard Harte (NUIG). Tolan dominated the contest from the first to the last bell and was delighted on hearing his name announced as the winner. In the 71KG final, Cathal Conaty (DKIT) took a split decision win against Leon Mooney (CI) while Felix Hawksworth (DCU) took a unanimous decision win over Darragh Hayes (UCD) in the 81KG final. In the 86KG division, Colin Cronin (LIT) won by walkover as his opponent pulled out of the final.

In the Intermediate finals, Conor Jennings (UU) took the 64KG title with a unanimous win over Ian Kelliher (CIT). This was an exciting contest with both boxers showing huge future potential. The 69KG title also went north as Daryl Clarke (UU) took a unanimous decision over Shane Carter (DCU). In the 75KG final, Adam Shelly (DCU) took a split decision win over Sean McGuirk (UCD) while big hitter Govonor Ogbonnaya (ITC) took the short route to victory in the 81KG final as he stopped Dean Griffin (UL) in a hard hitting contest.

The Senior Elites were up next and the 56KG final set the scene for the last few contests of the day as Eamon McNally (BMC) and Sean Purcell (WIT) traded leather in a highly skilled contest. The taller McNally used his reach to good advantage early on but Purcell eventually found holes in his defense and scored some good backhand shots and neat hooks. After three pulsating rounds, Purcell took his first IATBA title to add to his Irish title collection from his juvenile days.

The 60KG final saw two current Irish Champions face off as Terry McEntee (DCU) and Patryk Adamus (ICFE) met. McEntee is a notoriously slow starter and Adamus pounced on this to take the first round. However, McEntee is also noted for his superb engine and as the contest wore on, he took control and landed the some telling shots to seal victory and his first Elite Senior title. 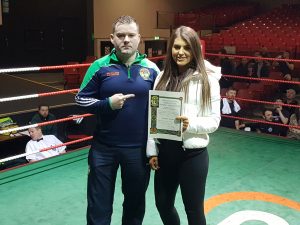 The 64KG final saw Sean Gallagher (TCD) make his return to the ring after a few years on sabbatical. He faced Matthew McCole (LKIT) and despite a good start, Gallagher tired as the rounds moved on and McCole took control of the contest and won unanimously. The Dungloe B.C. club man used his rangy shots to good effect to stop Gallagher getting any purchase on his attacks. Gallagher however showed that the basic skill set is still there but the rust needs to be dusted off.

Next up was the 69KG final and Seamus Lyons (UCD) took the title following a unanimous deciosion over Nathan Fleet (ITTD). This contest showed Lyons going on the attack from the off and Fleet having to use all his brilliant moving skills to try avoid the attacks. Lyons continually pressurised Fleet and these constant attacks eventually saw the scoring punches hitting the target and Lyons claiming the coveted IATBA 69KG Elite title.

The 75KG final saw Thomas O’Toole (GMIT) take on fellow westerner Conor Tighe (ITS). After three rounds of boxing, O’Toole came out on top as his movement and long punching proved impossible to cope with. Tighe tried to cut the GMIT boxer off, but the current Senior Champion O’Toole was not to be beaten on this occasion and added his first Elite title to his cabinet of titles and also added to his growing reputation as one for the future!

The Elite 81KG final was billed as one to watch as two big hitters faced off in Jason Clancy (ITS) and Pat Mongan (GMIT). However, less than 30 seconds into the first round, Mongan twisted his knee as he turned off on a shot and the referee had to end the contest due to the injury. It was massive disappointment for the viewing public as this had the hallmarks of being a thriller! Clancy is now the new 81KG Elite IATBA Champion while Mongan will hopefully make a speedy recovery and look towards claiming the title next season…but it will take something special to take it away from Clancy now!

The final action of the day took place in the 91+KG final where Eamon Tighe (ITS) and Cian O’Shaughnessy (NUIG) faced off. Both boxers had great movement and stamina for big men and kept punching to the final bell. O’Shaughnessy started brighter and definitely was leading after the first. But, Eamon Tighe is nothing if not dogged in the face of adversity, and with Stephen ‘Block’ Reynolds issuing instructions in his corner, the Ballinacarrow puncher started to find the target and land the scoring shots to claim the second round. That left it a ‘winner takes all’ situation in the last, and Tighe kept the momentum going from the second to also claim the last round and with it the the 91+KG IATBA Elite title.

Overall a brilliant days boxing and four excellent days of boxing in total to conclude the 2018 IATBA Championships. A huge thanks must go to Paul Geoghegan who is the man behind all that is good about the IATBA. Paul works tirelessly to ensure that all third-level institutions get the chance to participate in boxing events both at home and abroad. He spends untold hours doing the work that nobody sees and few appreciate, but without him, there would be no third-level boxing!

Also Sadie Duffy was invaluable for the efficient running of these Championships. She ensured that all entries were inputted, draws conducted, scoring systems set up and ran, officials in place and that the event went off without any hitches.

To all those who helped out by both refereeing, judging, helping with the computer, working the bell/clock or in any other way – thank you. The support for third-level boxing is growing every year and this year saw the biggest entry ever. I would like to thank IABA President Dominic O’Rourke who presented prizes during the Championships and also helped out with judging when we were under pressure. Olympic silver medalist John Joe Nevin also presented prizes at our finals and for this we are thankful. Finally, I would like to thank Dave (Stadium Manager) and Matty (Security) for all their assistance in ensuring a hugely successful IATBA Championships.

Until the next time…….