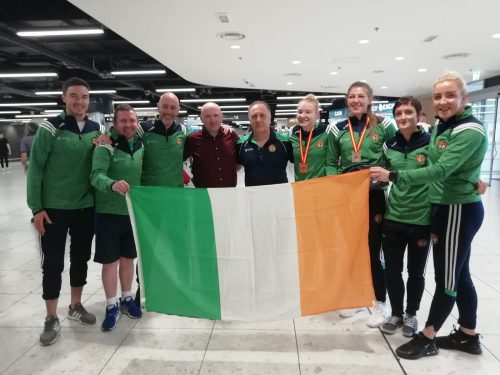 Roscommon’s Aoife O’Rourke and Dundalk’s Amy Broadhurst won gold and bronze at the tournament to improve Ireland’s all-time haul to 12 medals – 7 gold and 5 bronze – since 2001.

“I’m absolutely over the moon. It was a tough fight and I’m thrilled to have won gold. It’s incredible, I don’t think it has sunk in yet,” said the Castlerea BC stand out after becoming the only Irish female boxer besides current unified pro champion Katie Taylor to claim gold at this level.

Family, clubs, clubs coaches were at the airport this afternoon to welcome the team home.

IABA CEO Fergal Carruth, speaking from the airport, remarked that the team had performed magnificently against Europe’s finest, adding that Irish boxing will take a lot of confidence from performances in Madrid going into the Olympic qualifiers.

Meantime, Broadhurst, Ceire Smith and Christina Desmond were only beaten by the eventual gold medallist in their weights in Madrid.

Ireland finished in 4th spot in the medals table at the 12th edition of the tournament.