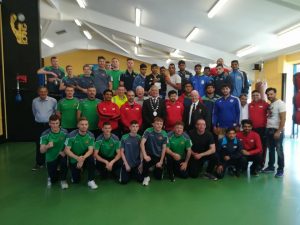 Ireland came from behind to beat India 9-3 at the Royal Theatre in Castlebar last night.

Rickey Nesbitt finished a lively encounter with Himanshu Sharma with a head shot, but the visiting light-fly got the nod on a split in the opening bout on the card, while Conor Quinn, who boxed with precision and intent in all three rounds, went three rounds with Guaray Solanki in the flyweight class.

Rio Olympian Irvine, doubling up at flyweight, found the target with crisp shots against Salman Shaikh and Jordan Moore, showcasing aggression and style, restored parity on a 4-1 split over Madan Lal.

Wily Dublin lightweight Bates edged Ireland in front for the first time in the match, the Irish Elite champion working well from body to head against the durable Ankush Dahiya, while Molloy was involved in the bout of the night with Duryodhan Singh Negi, and former European Youth, Junior and Schoolboy champion Nevin extended Ireland’s lead to 6-3 with 3 bouts remaining.

Nevin’s victory ensured that Ireland couldn’t be beaten, and Brown, Afansaev and Gardiner, who forced Parveen Kumar into a count in the third, sealed victory.

Both nations trained at the Lough Lannagh Centre and the Castlebar BC ahead of last night’s international.

Ireland versus India Castlebar May 26th