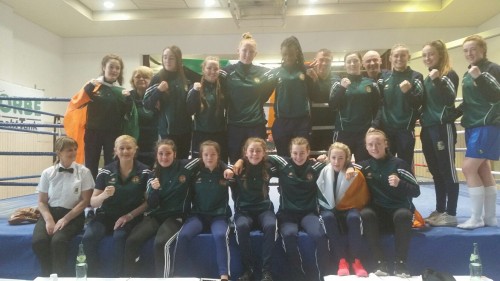 Ireland’s talented Juniors celebrated a high five of gold medals after claiming five top of the podium finishes at the Queens Cup in Germany this afternoon.

The Girls in Green also walked off with the Best Team Award after recording over 20 wins this week and producing some stunning performances.

Daina Moorehouse had to settle for silver after being edged out on a split decision by France’s Rim Bennama, massive display from Moorehouse.

The total gold medal haul was seven, with Kelsey Leonard, an AIBA World Junior medallist, and Shannon Sweeney going all the way in the Youth class.

Aoife Burke and Orla Garvey accepted silver after being edged in the Youths finals late this afternoon and early evening. 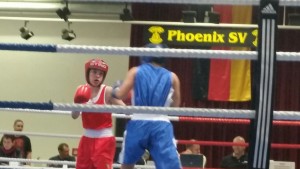 Burke was shaded – after it went back to the judges after a draw –  by Nataliya Sychugova of Russia and Garvey left absolutely everything in the ring in a thriller versus tall and rangy French lightweight Fatia Benmessahal.

Irish team manager Bernie Harold hailed the contributions of all involved after a tremendous tournament for Irish boxing.

She said: “Thanks to Pat Ryan, President of the IABA, for taking the girls in under the High Performance Unit where they have trained for the past eight weeks. Congratulations and thank you to the coaches Jimmy Payne (Head Coach), Antoinette Faye, Noel Burke and Jimmy Halpin whose expertise and dedication has brought this team to this high level.

“Thanks also to Tricia Ormonde-McLoughlin and Frank Murphy for their help.Congratulations is due too, to the Club Coaches of the girls who have worked week in, week out with them for years. The parents of the girls too should take a bow. They were an absolute pleasure to be with and fully supported each other throughout the competition. Each and every one of them is a credit to Ireland.”

Ireland’s medal-laden squad are due to arrive home on Sunday evening at approximately 7.25pm via Dublin Airport.