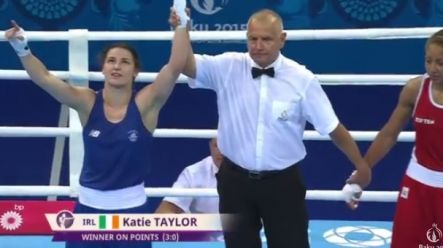 The European Games is a relatively new competition, but Ireland has still left its calling card at the “European Olympics” with seven medallists and five finalists in two editions of the tournament.

Two-time Irish Olympians Katie Taylor and Brendan Irvine won gold and silver at the inaugural Games in 2015 in Baku and Michael O’Reilly and Sean McComb bagged gold and bronze.

That haul helped Ireland finish in the top five in the medals table.

I’m delighted,” Taylor told the Sunday Independent at the time. “Thank God again for another great victory. I felt quite tired in there today. She’s (France’s Estelle Mossely) a very tricky opponent. I think I won every round – the tactics were spot on from the coaches in my corner.

“I’m so grateful to have some of the best coaches in the world in my corner. I felt a little differently in there. To be honest, my feinting wasn’t the best. I should have been feinting a bit more. But I managed to pull through and get the convincing performance.”

Harrington had to settle for silver after a hand injury forced her to withdraw from the lightweight final with Finland’s Rio 2016 bronze medallist Mira Potkonen.

The 2019 Games doubled up as the European Men’s Elites with Kurt Walker, Regan Buckley and Michael Nevin claiming gold and two bronze in the Belarusian capital.

The 2023 edition of the European Games will be held in Krakow, Poland.

IRELAND AT THE EUROPEAN GAMES