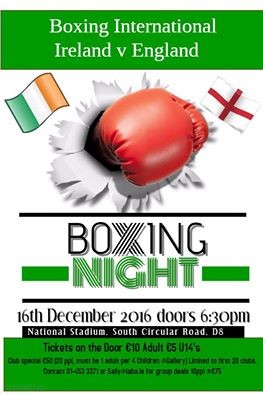 Ireland and England have been involved in some tremendous internationals down through the decades.

Both nations renew rivalries on Friday night over nine bouts at the National Stadium in Dublin.

In 1955, two of the men that went on to become legends of the sport in Ireland lined out against an English selection at the same venue.

Fred Tiedt and Freddie Gilroy both won on the night. A year later the Dublin and Belfast duo were part of an Irish boxing team that won four medals, one silver and three bronze, at the 1956 Olympics in Melbourne.

Meanwhile, Friday’s international with England will feature a number of special guests.