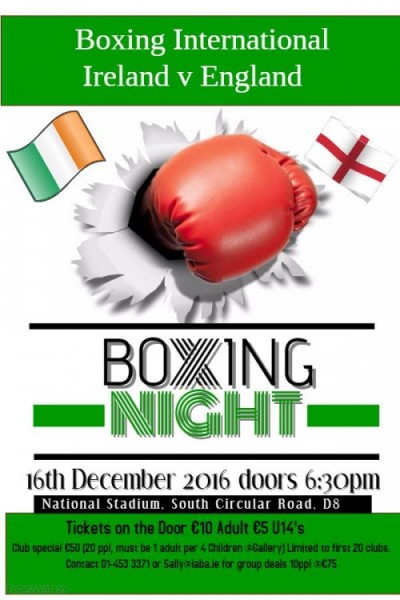 London 2012 and Rio 2016 Olympians Darren O’Neill, Brendan Irvine and Joe Ward have been named in a nine-strong squad to face England.

Both nations clash at the National Stadium in an Elite men’s and women’s international on December 16th.

Kellie Harrington is dropping down to lightweight for the meeting.

Harrington became the first Irish female boxer besides Katie Taylor to reach an AIBA World Elite final in Kazakhstan earlier this year, thus guaranteeing herself light-welterweight silver in another first for Irish boxing.

But the joint World No. 4 ranked light-welter will now compete at 60kg, which is one of the three Olympic weights for women.

“England are a world class boxing nation and are old rivals. There have been many fantastic internationals between both nations down through the years and we  are very much looking forward to the renewal of rivalries,” he said.

“It will be a good prep fight to see where I’m on the way back to heavy training for the Nationals,” said the ex-European Elite silver medallist.

As regards the National Elites, the Kilkenny southpaw will be aiming for his seventh title at two different weights – middle and heavy.

“It will be my 13th season entering the Nationals, but my 12th competing as I broke my thumb in 2007 and had to withdraw. The World Championships are in Hamburg in 2017 so it’s obviously going to be a big year with the National, World and European Championships in 2017.”

Zaur Antia will be working Ireland’s corner at the home of Irish boxing.

The six-time Georgian National Elite champion, a bronze medallist at the former USSR Championships, will lead Team Ireland on the road to Tokyo 2020.

He said: “I am delighted on both a personal and professional basis to commit to Irish boxing,”