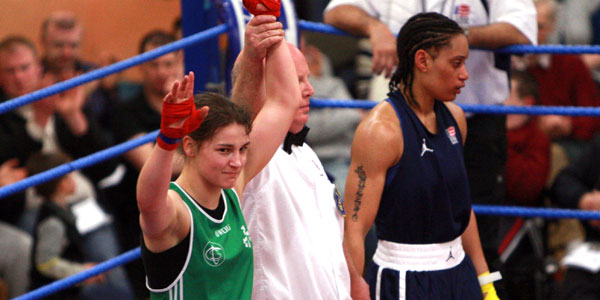 Katie Taylor did the double over Queen Underwood in Dublin and Athy in 2009 to help Ireland to a 17-5 victory over the USA.

The Bray woman, who edged Underwood en route to gold at the 2010 World Elites in Bridgetown, Barbados, recorded emphatic victories in Leinster.

Seattle-native Underwood, with Taylor aiming for her third successive World crown, was 10-2 down after the first two rounds against the Bray woman in Barbados but the fight ended 18-16 to Taylor under the old computer scoring system in one of her closest World Elite outings.

The Wicklow orthodox, the current IBF/WBA/WBC/WBO lightweight champion, admitted that the bout was one of her toughest four-rounders.

Three-time Olympian Barnes recorded a second win in Athy, along with Ryan Lindberg.

And St Michael’s Athy BC standouts David Oliver Joyce, also an Olympian, Eric Donovan, John Joe Joyce, in his second win, and Roy Sheahan didn’t need to be asked twice in their own backyard.