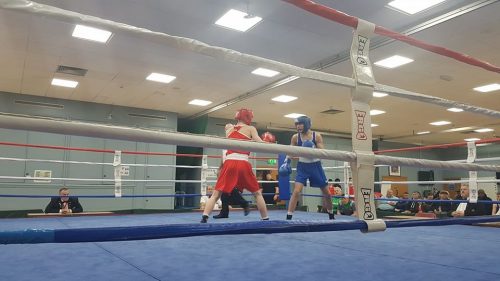 Ireland and Wales shared the spoils after a see-saw Youth and Junior international at the National Centre in Cardiff this afternoon.

Dylan Eagleson and Rachael Lawless made it 2-1 to Ireland after three bouts but Romeo Costa restored parity before Martin McCullagh edged the visitors back in front.

Scott Jones levelled the 8-bout international versus John McConnell after a close three-rounder, but Aodhan Byrne nudged Ireland ahead.

Wales’ Paddy Murphy shaded Matthew Tyndall on a 3-2 split in the final bout of the session.

Martin Collins lost out to Harvey Williams in the opening bout of the afternoon after three tight rounds.

“We saw some fantastic boxing in all eight bouts today,” said Irish team manager Eugene Duffy.  “Our boxers were a credit to the Association.

Both nations meet again at the same venue tomorrow. Boxing begins at 12pm.

Chloe Gabriel and Suffie Edris will line out for Ireland on Sunday.

(Image from today’s meeting in Cardiff)