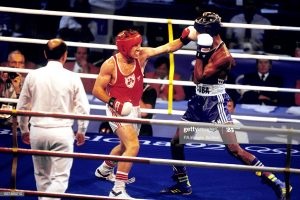 So said Michael Carruth on the day of his Barcelona 1992 Olympic final with Cuba’s Juan Hernandez-Sierra.

And the Irish captain and Drimnagh BC southpaw remain true to his word against the then World and Pan American champion.

Up to 1992, only three Irish athletes had won gold – Ronnie Delaney, Bob Tisdall and Pat O’Callaghan.

Carruth, a World Elite medallist, made it four on a 13-10 decision under the new computer scoring system to secure Irish boxing’s first Olympic title.

But he had to settle for silver again at the 1996 Games after losing to Russia’s Oleg Saitov in the welterweight decider.

Click here for favourite Irish sporting moments on RTE and radio coverage of the 1992 final.