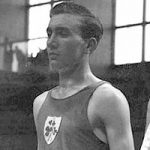 It appears to be generally accepted that Gentleman John McNally wrote Irish boxing into the history books after he beat Korea’s Joon-Ho Kang in the bantamweight semi-final at the 1952 Olympics in Helsinki on August 1st of that year.

That win secured at least silver, a first Olympic medal for Irish boxing – twenty eights years after Ireland entered the Olympics independently for the first time at Paris 1924.

But because the 1952 Games was the first Olympiad in which beaten semi-finalists were assured of bronze, the Belfast bantam actually guaranteed Ireland a first medal – at least bronze – twenty-four hours earlier after seeing off Italy’s Vincenzo Dall’osso in the quarter-finals.

Not that McNally was settling for bronze.

Before the 1952 Games beaten semi-finalist boxed off for bronze, but immediately prior to the Helsinki Olympics it was decided, at an AIBA Congress, to eliminate bronze medal box-offs.

But no bronze medals were awarded at the 15th Olympiad in the Finnish capital. The losing semi-finalists were presented with diplomas and their national flags raised.

The bronze medals were presented retrospectively years later at a ceremony in Helsinki, but only a handful of the beaten semi-finalist from 1952 showed up to collect their medals. Apparently, there’s quite a number of unclaimed Olympic bronze medals out there!

It was all of academic interest to McNally, as he upgraded to silver after beating Kang to set up the 54kg final with Finland’s Pentti Hamalainen at the Messuhalli Stadium on August 2nd, 1952.

The stage was set, but it wasn’t to be for the Ulster ace, who had beaten Alejandro Ortuoste of the Philippines in the preliminaries, as Hamalainen was handed a controversial split decision.

“The fight took place in a packed and partisan arena and when the split decision was called in favour of the Finn the place erupted in celebration, recalled McNally, in Barry Flynn’s “Legends of Irish Boxing” (Appletree Press).

“It was the last day of the Games and the host nation had not yet won a gold medal so there was a lot of pressure on the Finn’s shoulders to deliver. The Finn had been cautioned at least eight times during the bout for hitting with the inside of the glove and for using his head to open up my eye, which in today’s rules would have cost him points.

“When the bell rang we were all convinced that I had got the decision. It came down to the three judges and the British judge gave it to me, while the American and Austrian gave it to Hamalainen. I could not believe it when his hand was raised.”

After the final, McNally had to receive treatment to his back for ropes burns. He recalled that the doctor warned him that he would be applying pure alcohol to his wounds and that it would sting.

McNally, a bronze medal winner at the 1953 European Championships, added: “I recall that there was a boxer lying meditating on the bench beside me preparing himself mentally for his own final bout and he held out his hands for me to grip. The alcohol really did hurt so I squeezed that boxer’s hands very hard in reaction to the pain.”

“Only later did I realise that the man who offered to hold my hands was the legendary Floyd Patterson, future heavyweight champion of the world. It was an act of kindness that I have never forgotten.”

Meanwhile, McNally’s silver medal was the first pieces of silverware that Ireland had won at the Olympics since Bod Tisdall and Pat O’Callaghan struck double gold in track and field at the 1932 Games.

The USA finished on top of the medals table in boxing at the 1952 Games with five gold medals, one of which went to Patterson. Irish boxing, courtesy of McNally’s podium finish, finally made the Olympics medals table, finishing in 13th position.

“I cherish the great times that I had representing Ireland and this award has been most welcome,” said the modest Belfast bantamweight, who also carved out a successful career as a musician, after he was inducted into the IABA Hall of Fame in 2008.

(Images: John McNally on the podium and versus Pentti Hamalainen in Olympic final)