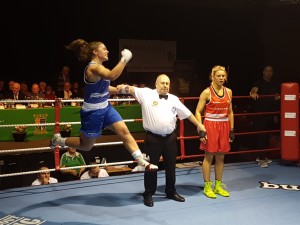 Kieran Molloy (Oughterard BC) and Grainne Walsh (Spartacus BC) won double welterweight gold at the Eindhoven BoxCup in the Netherlands last October.

Walsh said she was thrilled to win three on the bounce since Friday, while Molloy was in the running for one of the Best Boxers Awards after a cracking decider with  Yeasungnoen.

The Irish squad secured the Best Team Award at the three-day tournament.

Please click here for tournament site and here for results.