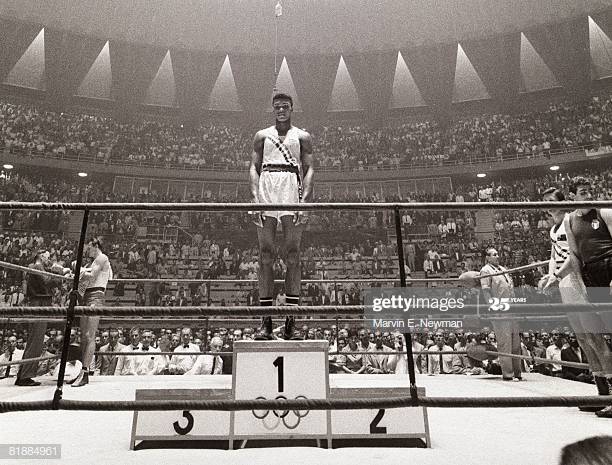 Irish boxing travelled to Italy with optimism after finishing in four podium positions at the 1956 Games.

Five medals had been secured from the last two Olympiads, two silver and three bronze. Confidence was high ahead of the competition at the Palazzo dello Sport venue.

But there was no joy for Irish pugilism in the Eternal City as none of the ten-strong squad, Ireland’s biggest ever Olympic boxing panel, medalled.

Bernie Meli, at 20 the youngest member of the Irish squad, beat Greek light-welterweight Michail Dememtre in his opening bout but lost to Bohumil Nemecek of Czechoslovakia, who went on to win gold.

Omagh BC lightweight Danny O’Brien also opened his account with a win, beating Esteban Aguilar from the upcoming boxing nation of Cuba. However, he then went out to the eventual silver medallist, Sandro Lopopolo of Italy, in the next round.

The great Harry Perry, a multiple Irish champion, came unstuck. The Dubliner, appearing in back-to-back Olympics and a bronze medal winner at the 1959 European Championships in Switzerland, dropped a split decision to Korea’s Ki-soo Kim in his opening bout.

Colin McCoy was beaten in the light-heavyweight class by Finland’s Matti Aho, who was eliminated by Bulgaria’s Petar Stankov in the last-16.

Stankov was subsequently beaten by Zbigniew Pietrzykowski in the last-eight, but the Polish fighter, who saw off the challenge of Italy’s Giulio Saraudi in the semi-finals, had to settle for silver after ending up on the wrong side of a unanimous decision to Clay who was convinced by his coach that unless he got over his fear of flying that he would never be Olympic or World champion.

Clay got on the flight.

Meanwhile, Kenny, who sold copies of the Echo of the streets of Cork as a young man, beat Emile Anner of Switzerland and Crumlin BC light-middle Reid saw off Brazil’s Helio Crescencio in their opening contests.

Clay was one of three American boxers to claim gold medals in Rome, but that wasn’t enough to secure top spot of the USA in the medals table.

Clay, who endured a strong challenge from the experienced Pietrzykowski, a three-time Olympic medallist and four-time European Elite champion, in the first round of their 81kg final, was the only boxer of Irish descent to medal in Italy.

According to Thomas Hauser’s critically acclaimed Muhammad Ali: His Life and Times, Clay’s mother, Odessa Grady Clay, was the granddaughter of Abe Grady who emigrated from Clare soon after the American Civil War.

Hosts Italy, with three gold, three silver and one bronze medal, topped the medals table at the 1960 Games.

The Rome Olympiad was the first Olympics to be televised. There was no change to the boxing program, with the same ten classes that had been contested at Helsinki in 1952 and Melbourne in 1956. The scoring system in 1960 was slightly new, as there were now five judges instead of three as at previous Olympics.