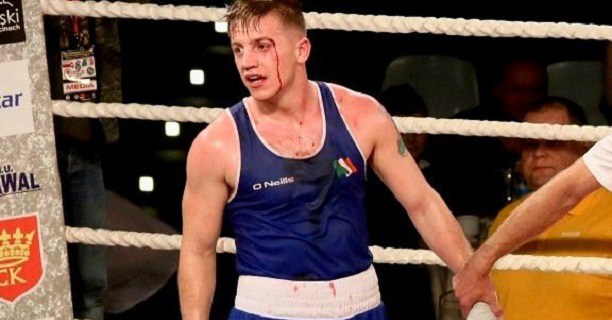 Irish Elite champion Wayne Kelly, pictured, believes the three bouts he got under his belt in the USA are all part of the learning process on the road to the 32nd Olympiad.

The Irish squad, under head coach Zaur Antia and staff, arrived home from America early this morning after their three-match meeting with the Stars N’ Stripes in Boston, Springfield and Manchester, New Hampshire.

Kelly, who boxes out of the Portlaoise BC, beat Adrian Benton to end the tour on a high note with both sides claiming four wins apiece in New Hampshire.

Kelly, Kellie Harrington Kieran Molloy and Caoimhin Ferguson had their hands raised in victory in Manchester.

“I am happy with how the experience went, first time fighting in the States and I had three competitive fights with world class operators, said Kelly.

“This is all a learning curve and I am growing as an elite boxer and I can’t wait to keep improving and learning.

“That is my aim for this year. With next year being Olympic qualifier year I want to  be the best boxer I can be and win European and World medals to reach my dream, the Tokyo 2020 Olympic Games.”

Bernard Dunne, IABA High-Performane Diector and team manager in the USA, hailed the performances of the Irish team against the Americans.

Both nations met 30 times in the three-match tour.Fifteen of the bouts were decided on split decisions.