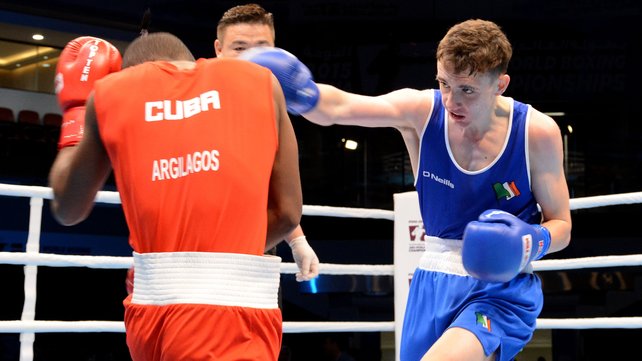 The Irish Athletic Boxing Association have confirmed a nine-strong squad for the European Elite Men’s Championships in the Ukraine.

Rio 2016 and London 2012 Olympians Brendan Irvine, Steven Donnelly, Joe Ward and Darren O’Neill have been named in the Irish panel for the tournament which will act as the sole qualifier for the 2017 World Elite Championships in Hamburg, Germany in August/September.

The top eight boxers (quarter-finalists) in each of the ten weights in Kharkiv book tickets for Hamburg. Europe has the highest quota of all the continents with 80 berths.

280 athletes will compete at the 2017 World Championships. 260 of those places are available through the qualification process with the other 20 places going to the host nation (10) and wild cards (10).

Ward and O’Neill have won three European medals (two gold for Ward and one silver for O’Neill) between them at European Elite level since 2010 and Irvine and McComb have claimed silver and bronze at the 2015 European Games.

Donnelly impressed at Rio 2016 after winning two fights before losing on a split decision to Morocco’s current World Elite champion, Mohamed Rabii, in the last-eight with at least bronze up for grabs.

Patrick Mongan and Emmet Brennan are the current Irish Elite champions, with Mongan impressing in his victory over Russia’s Rio 2016 bronze medallist Vladimir Nikitin, a man who doesn’t need an introduction to Irish boxing fans, at a recent Round Robin at Dublin’s National Stadium.

Dean Gardiner came with one win of qualifying for Rio 2016 in the last Olympic cycle.

Ireland has held the European Elite bantam title for the last four years, with John Joe Nevin and Michael Conlan, who have both switched codes, winning gold in 2013 and 2015. Kurt Walker will carry Ireland’s hopes in the bantam class in Kharkiv.

“I have as good a chance as anyone of winning it and I really fancy my chances, but sometimes you need a bit of luck with the draw,” said Walker.