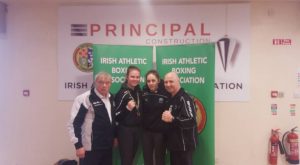 Please scroll down for titles won by Ireland’s clubs in the 2017/18 season so far.

The table reflects titles secured at the National Senior Championships (formerly Intermediate), U/18 Open and U/22 Championships and also includes belts won by walkover.

52 belts have been claimed by Ireland’s clubs so far this term. Dublin’s Glasnevin BC is leading the way with a hat-trick of wins, courtesy of Jordan Moore (2) and Michael Avetisian.

Two sisters and two brothers, Ciara and Aoife Ginty, pictured above with coaches, and Paddy and Edward Donovan, have won a brace of belts for their respective clubs, the Geesala BC in Mayo and the Our Lady of Lourdes BC (OLOL) in Limerick.

Kevin Sheehy and former World Junior medallist Niamh Earley have earned two belts apiece for the St Francis BC and Ryston BC.

The table will be updated after the upcoming National Novice and Elite Championships.