The Irish trio line out for BSK Hannover Seelze versus BC Chemnitz 94 in the Bundesliga in Hanover on Saturday evening.

Three Irish boxers, James Cleary (1-0), Adam Nolan (0-1) and George Bates (2-0) – Bates has signed up again this year and will be in action for BSK Hannover Seelze in the New Year -, competed in the latter half of the Bundesliga 2015/16 season for BSK Hannover Seelze last March and won four of five bouts, with London 2012 Olympian Nolan unlucky to drop a split decision to former European champion Balazs Bacskai of Hungary.

Ireland will be involved from the start of the Bundesliga season this term, explained Irish coach Dmitry Dimitruc.

He said: “There have been a few rule changes from last season. Last year there was a one-kilo allowance, but not this year, he said.

“Teams must also have an under 21 (John Joyce) registered. It is a very competitive tournament. There will be six fights and if our club gets to the final there will be two more fights.”

“Fights are over three rounds.Everything is to according to AIBA Open Boxing (AOB) rules and the weigh-ins are two hours before matches begin,” he added.

The Bundesliga is similar to the World Series of  Boxing arrangement where sides use athletes from different countries under an international draft. 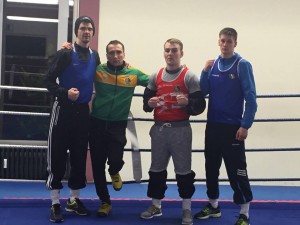 Adam Nolan, James Cleary and George Bates with Irish coach Dmitry Dimitruc ahead of their Bundesliga match in Germany in March