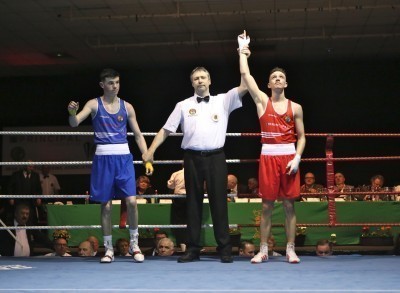 Three-time Elite champion Brendan Irvine admits that being an Olympian has its own pressures at an Irish Elite tournament.

The Antrim stylist, who represented Ireland at Rio 2016 where he was beaten by the eventual gold medallist and Val Barker Male Boxer of the Games winner, Uzbekistan’s Shahobiddin Zoirov, claimed his third successive Irish title at the expense of Cork prospect Thomas McCarthy at the National Stadium last Friday.

Irvine, just 20, is now a two-weight national champion as his inaugural belt was won at light-fly, the weight he is ranked No. 9 in the world at by AIBA, and his last two at fly.

Having also won silver at the European Games for Ireland, Irvine could once slip into National Stadium under the radar screen and minus the fanfare – not anymore.

“When I was in my first seniors nobody really knew who I was, now people know who I am. That young fella (Thomas McCarthy) obviously knew who I was and he was only 18, same as I was when I first entered, so the roles were reversed a bit, he said.

“There was no pressure on him, he was just coming to give it a go. If he beats me, he’d be loving it, he’d be the talk of the place. The pressure was on me I suppose, but you just get used to it.

Irvine is now targeting the European and World Championships in the Ukraine and Germany this summer.

The Europeans are the sole qualifiers for the World Championships. The top eight (quarter-finalists) in each of the ten weights book tickets for Germany.

“And you always have to remember that, although there’s no Olympics, this is a huge year for me with the European Championships and the Worlds if I qualify, ” added the St Paul’s BC man.