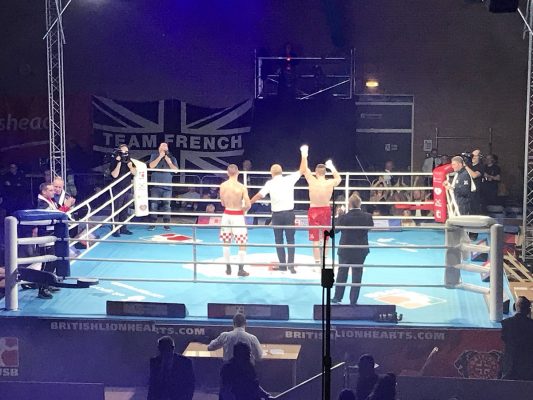 Joe Ward has his hand raised in victory last night

The final scores for the Westmeath southpaw read 50-45 across the board after five, three-minute rounds, the Moate BC lefty helping the hosts to a shutout 5-0 win.

The victory, which sees the Lionhearts bounce back from their loss to the French Fighting Roosters in Paris in their opening group match, is his sixth in the WSB as he recorded five wins from six outings for the Lionhearts in the 2013 WSB season.

“Job done, move on to the next one,” said the European No. 1 and World No. 4 ranked light-heavy via social media.

“It’s all about building towards where I want to be and what I want to achieve, but I’m grateful for this opportunity. I want to thank the people that helped me over the last few weeks and also years.”

Belfast lightweight Sean Duffy is also signed with the Lionhearts.

The Holy Trinity BC man is expected to box against Italia Thunder in Liverpool in early March.

Joe Ward with his WSB team-mates