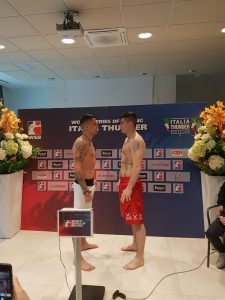 Joe Ward cruised to his second win of the season for the British Lionhearts in the World Series of Boxing (WSB) in Milan tonight.

The current European Elite light-heavy champion beat Bulgaria’s current Olympic Youth champion Blagoy Naydenov 50-45 on all three cards to help the Lionhearts to a Group B win over Italia Thunder.

Ward, who staggered Naydenov with big backhands in the earlier rounds, beat Damir Plantic of the Croatian Knights on an identical score in Newcastle last month and has yet to drop a round after ten rounds of WSB boxing so far in 2018.

Irish coach Dmitry Dimitruk was working Ward’s corner for evening’s five-rounder and said the Westmeath southpaw was always on top.

The Lionhearts won the five-bout match 4-1 to strengthen their grip on second spot in the Group B table behind the French Fighting Roosters.

Ward, a two-time World Elite finalist, will be back in action versus the French in Newport, Wales in mid April.

“I was always in control,” said Rio Olympian Ward. “The guy was very passive, it was never in doubt. I probably won that fight at 50%, cruising. I’m looking forward to the next fight against the French, they’ll be more of a threat.”