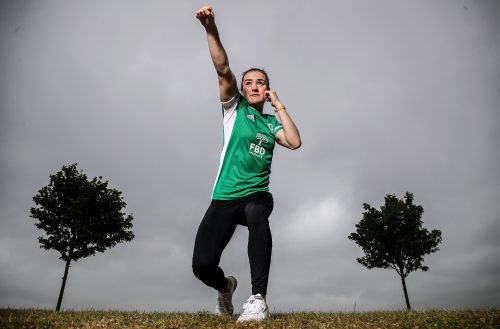 REPRO FREE***PRESS RELEASE NO REPRODUCTION FEE*** EDITORIAL USE ONLY
FBD Brand Ambassador Kellie Harrington Media Event 3/6/2020
Pictured is FBD Brand Ambassador and 2018 World Championship gold-medallist Kellie Harrington. FBD Insurance is a principal partner to Team Ireland since September 2018. As part of its sponsorship, FBD is supporting Team Ireland’s Olympic hopefuls to enable them to focus on personal bests and breakthrough performances at the Summer Olympic Games in Tokyo which will now take place in 2021. It is this same spirit of support and protection that sees FBD as Ireland’s only homegrown insurer support more than 500,000 policyholders for over 50 years. Mandatory Credit ©INPHO/Dan Sheridan

Kellie Harrington is eager to get back sparring and trying out some of the techniques she’s been working during the Covid-19 restrictions on sport.

The 2018 World Elite lightweight champion would like to be one of the athletes qualified for the Tokyo Olympics.

Harrington was part of the thirteen-strong Irish squad for the European qualifiers at the Copperbox Arena in London in March.

But the tournament was cancelled after three days on St Patrick’s Eve because of the coronavirus outbreak.

Harrington, who required a top-six finish to qualify in London, was due to meet Poland’s Aneta Rygielska, an opponent she beat earlier this year, on St Patrick’s Day two wins away from booking an Olympic ticket.

It’s expected that the European qualifiers will resume early next year. As it stands, 16 flyweights and featherweight, including Irish captain Brendan Irvine, qualified for Tokyo in London.

Harrington wants to join the Ireland skipper on the plane to the 32nd Olympiad, but for now, the 2016 World Elite light-welter silver medallist is training and staying positive during the Covid-19 restrictions.

“I’m taking full advantage of it. You have to take the positives out of a negative situation and just get on with it and keep moving forward, said the St Mary’s BC woman and only Irish boxer to win two World Elite limits at different limits.

“I’m training most days. I have the (punch) bag out the back and my partner does pads with me. I have a little small gym. Me shed is turned into a gym. I’m still doing what I need to do.

“So it’s hard to do your usual routine when you have that much going on around you. It felt weird and I was disappointed that I didn’t get to box because that was the qualifiers obviously.

“Now that’s still over my head. There’s a lot of athletes qualified already and I would like to be one of them. Like me, there’s plenty of other people out there who haven’t qualified so I just have to get on with it and move forward.

“I’m really looking forward to getting back sparring because I want to try what I’ve done for the last ten weeks, what I’ve been working on. I want to see if it actually comes into play when I spar.

Belfast flyweight Brendan Irvine was slated to meet Spain’s Gabriel Escobar in London. Both men, who have already qualified, will go head-to-head for at least bronze.

The new dates for the European and World qualifiers have yet to be confirmed, and the date for the Americas qualifiers.

(Tournament was postponed on March 16 because of the coronavirus outbreak)