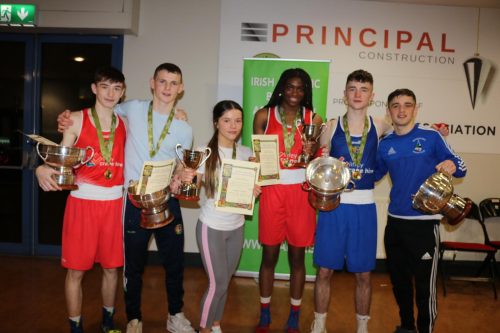 Teenage standouts Moorehouse and Gallagher, aged 18 and 19, were presented with their awards last Friday after winning their first Elite gold medals.

“Title number nine, I couldn’t be prouder of myself,” said Moorehouse.

Gallagher had his hand raised in victory after a classic flyweight final with Regan Buckley who claimed the light-fly crown in February.

“It’s the biggest win yet, especially in my first year as an elite boxer,” he told the Irish News.

“It was a tough weight division against three tough lads, beat them all convincingly, so I’m chuffed with that, chuffed with the performances throughout the tournament.”

Meanwhile, at the start of the year, Michaela Walsh had seven titles – now she has nine.

Her brother Aidan also had his hand raised in victory last Friday night in a historic double for the Walsh family and Irish boxing.

“I wanted to make history, there’s no stopping us,” said the nine-time champion Michaela.