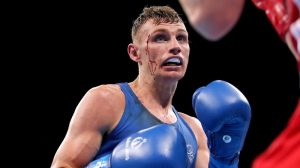 Sean McComb, pictured, bowed out of the World Championships at the last 16 stage to Cuba’s Andy Cruz-Gomes in Hamburg,Germany tonight.

The Belfast southpaw was on the wrong end of a unanimous decision in the 64kg class, with Cruz-Gomez,the No. 2 seed in Germany, advancing from a top class light-welter contest.

McComb won Friday to set up tonight’s three-rounder with the current Americas and World Series of Boxing champion.

Three-time European champion Joe Ward and his fellow Rio Olympian Brendan Irvine and Dean Gardiner are in action tomorrow in Hamburg versus Georgia, Korea and Columbia fighting for places in the quarter-finals.