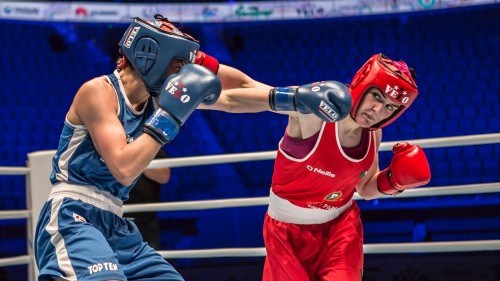 St Michael’s Athy feather Moira McElligott has been called up to the Irish squad to face England at the National Stadium on December 16th.

Rio 2016 Olympians Brendan Irvine and Joe Ward are also between the ropes, while George Bates, Stephen McKenna and Sean McComb, who line out for BSK Hannover in the German Bundesliga this season, are also in action.

European Games silver medallist Irvine wants to impress in his first outing since the 31st Olympiad.

He said: “It’s my first fight back since the Olympics and I’m looking forward to getting back in the ring as it will give me a good test before the Seniors and help my preparation leading up to that.

“I need to focus on the Seniors, one step and a time,” added the World Elite quarter-finalist ahead of a big 2017 with the World and European Men’s Elite Championships penciled in for the New Year.

AIBA World Elite silver medallist Kellie Harrington has dropped down a notch from light-welter to lightweight.

Harrington, the first Irishwoman to reach an AIBA final besides Katie Taylor, received a boost this week after improving from No. 4 to No. 3 in the AIBA World 64kg rankings.

“I’m looking forward to representing my country at this international and being part of a top class team with Olympians and Irish international boxers.This alone is a boost in confidence, said the current Irish champion, pictured above (red).

“I’m grateful to be giving the opportunity from the coaching staff in High Performance, including Zaur, Eddie, Dima and John.”

“And I look forward to spending Christmas with my family and looking back over a good year in 2016 and planning for 2017,” added the RTE boxing pundit.

Ireland’s last outing of an eventful 2016 will feature a number of special guests.