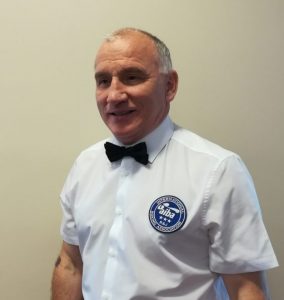 Ben McGarrigle, pictured, heads back to the future next Friday when he travels to Australia as one of the panel of Referees and Judges (R&Js) for the 2018 Commonwealth Games.

The 21st edition of the tournament officially begins on April 4 on the Gold Coast.

The R&Js are scheduled to take part in a two-day AIBA seminar ahead of the commencement of boxing on April 5.

The wheel will turn full circle for McGarrigle Down Under as 20 years ago he was with the Irish squad at the 1998 Commonwealth Games in Kuala Lumpur, Malaysia.

“That’s me back at the Commonwealth Games twenty years to the year that I boxed in them in Kuala Lumpur. I’m delighted to repeat history,” said McGarrigle who officiated at the 2017 AIBA World Elite Championships in Hamburg.

“I boxed the Welsh man Kevin Evans (Evans was beaten in the semi-finals by Canada’s eventual champion, Mark Simmons) in the quarter-finals, I got an accidental cut in the first round whilst ahead on points and the doctor stopped it. That was as for at least a bronze. Today’s rules are different, it would go to points,” added the AIBA 3-Star R&J.

Meanwhile, the Northern Ireland squad are in Australia in training camp in Canberra.

Current Irish and EU Elite champion Michaela Walsh  will be aiming to go one better than the 2014 Commonwealths in Glasgow where she was edged out on a split decision by two-time Olympic champion Nicola Adams in the 51kg final.

“We have the talent, that’s something boxing has always been very lucky with, having that conveyor belt of talent coming through all the time, head coach John Conlan told the Irish News.

“As they’ve gone on they’ve supported each other, they’ve gone through the journey. They’ve bonded as a team. We’ve created a really good environment to train and learn.”

Northern Ireland topped the boxing medals table at the 2010 Commonwealths in New Delhi and finished 2nd in the medals table in Glasgow four years later.

An impressive haul of 14 medals – five of which were gold –  were won at both tournaments.