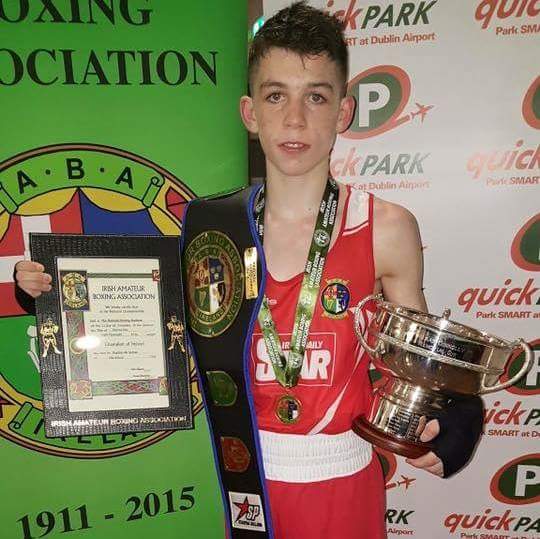 The Old School BC stand out, who claimed his first Elite belt at light-fly in December, 2015, will box at bantam at the flagship tournament of Irish boxing.

“I was getting too tall for 49kg and then 52kg,” McKenna admitted to The Irish News.

The 19-year-old has been sparring with multiple Elite champion Eric Donovan, who has since turned pro, and ex World champion Eamonn Loughran in addition to multiple spars with his brothers Aaron and Gary, who may also enter the Elites.

He added: “I was doing a lot of training camps in Ireland with the likes of India and Kazakhstan, getting a lot of experience so it was great.

“I had my first international fight at the Gee Bee in Finland and I lost to the European Games champion from Russia in a very close fight that could’ve gone either way, it was a very competitive fight and showed me what level I’m at.

“In that time I’ve been doing a lot of strength and conditioning, because I was getting too tall for 49 and then 52. I’d no real competitions in 2016 so I took my time to build myself into a 56 kilo fighter.”

McKenna also reckons he’s the man to fill the spot vacated by Michael Conlan, the only Irish boxer besides John Joe Nevin and Katie Taylor to be ranked No. 1 in the Word.

The Tokyo 2020 Olympic is his ultimate goal.

“I think I’m the man to replace Michael Conlan,” he said.

“When I was younger I always looked up to him and I’m good friends with him now. Unfortunately, I never got the chance to spar him because I was always lighter, I mainly sparred with Paddy (Barnes).

“But I believe I have the ability to go on and win big things in the future at European and World level. It’s a busy division but none of them train harder than I do.

“I’m training three times a day, every day. I live the life of a full-time athlete. My dream is to be an Olympic champion in 2020 and this is the first step on the road.”