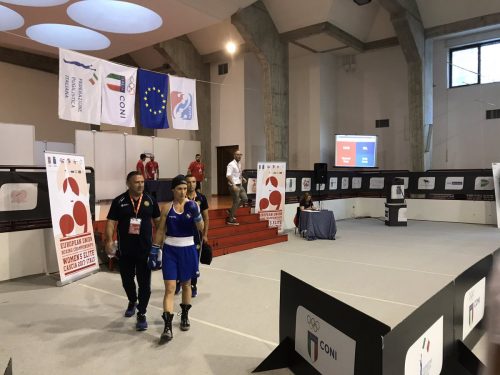 But Carly McNaul bowed out on a split decision.

O’Hara detonated all the power shots, with one judge giving her two 10-8 frames and another a 10-8 stanza against Finnish southpaw Saru Lehtonen. The first was fairly frenetic, with the game Lethonen moving forward constantly, O’Hara responding in kind. However, the Irish light-fly settled behind her jab from the start of round two en route to a confidence-boosting in.

Duffy, constantly finding the target with two and three-punch combinations, also earned two 10-8 rounds on her way to having her hand raised in triumph at the expense of Hungary’s Kinga Mezovari in the featherweight class. She joins O’Hara, Michaela Walsh, Kellie Harrington and Christina Desmond in the last-eight.

McNaul emptied the tank after losing the first to France’s Wassila Lkhadiri, but the Belfast fly, dominating and backing her opponent up, should have taken the second on all five cards – two of the five judges went against her. The third round was close. A big performance from McNaul in a fight which could have gone either way.

Grainne Walsh fights tomorrow in the quarter-finals against Welsh welter Lauren Price, and,in a change in the program, Michaela Walsh and Kellie Harrington are also in last-eight action on Monday.