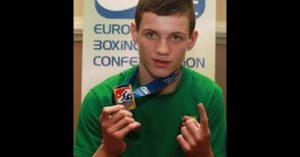 Sligo’s Jordan Myers, pictured, joined Galway’s Gabriel Dossen in the semi-finals of the European Youth Championships after another massive performance in Antalya,Turkey today.

But Limerick’s Patrick Donovan was adjudged to have been beaten 29-28 across the board by home boxer Tugrulhan Erdemir, the current World Junior champion.

Myers,not for the first time in Antalya,put it all on the line in a fiery battle with durable Serbian middleweight Djozdic Buksic.

Both young men had their moments,but Myers’ cleaner work at the start of the first and his greater punch volume and industry throughout saw his hand raised in victory on a split decision.

Donovan, on unofficial cards, won rounds two and three of his contest. The first frame was pretty close in the repeat of the 2015 World Junior final which Erdemir won in Russia.

Inching toward his opponent for the majority of the three-rounder,Donovan landed the cleaner shots throughout and found the target with three straight rights in the third. He also rattled the Turk, who worked well on the inside in all three rounds, with a sweeping left in the first.

Magnificent performance from the Irish captain.

Tomorrow is a rest day at the tournament. Dossen and Myers, both guaranteed at least bronze, will be back in action on Friday.