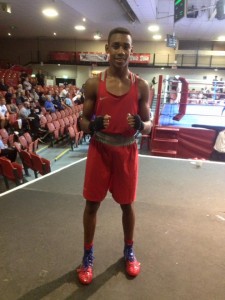 World Youth bronze medallist Dossen, pictured, progressed to the last-eight after a hard-earned but deserved victory over a home favourite.

The Olympic BC welter beat Russia’s European Junior champion Ivan Stupen on a split decision at the Black Sea Port to join Tommy Hyde in the quarter-finals.

The Galway teen will face an Armenian opponent on St Patrick’s Day for at least bronze.

“It was a fantastic performance from Gabriel and a brave performance from Jason against a quality opponent,” said Irish coach Billy McClean who is working Ireland’s corner in Anapa with Fergal McKenna.