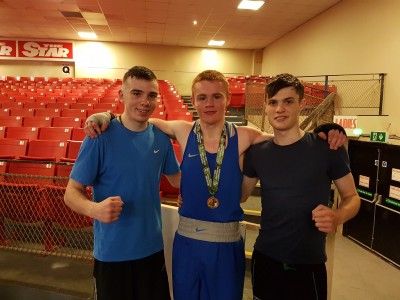 Kieran Molloy, right, with Brett McGinty and James McGivern at the National Stadium

Galway welterweight Kieran Molloy will be the only Irish boxer in action at the Feliks Stamm tournament in Poland today.

The 2013 World Junior bronze medallist meets Poland’s Gibaldo Maksymilin in the 11th bout on the programme which begins at 4pm (Irish time) in Warsaw.

Molloy, who boxes out of the Oughterard BC, won on his Feliks Stamm debut yesterday versus Norway’s Jamshid Nasari.

Today’s three-rounder with Maksymilin will be for at least bronze, with Molloy looking to join Myles Casey in the last-four.