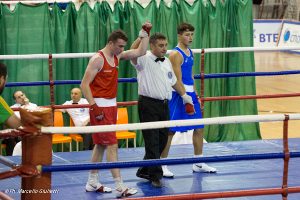 The Galway welter beat Belgium’s Ruben Veciuna on a split decision to join James McGivern, Michael Nevin and Kirill Afanasev in the last-four.

Sessions begin at 2pm and 6pm in Eindhoven tomorrow. The bouts are being scored by three judges.

Meantime, Christina Desmond and Tiegan Russell, both representing the Fr Horgan’s BC in Cork, also advanced from today’s quarter-finals.