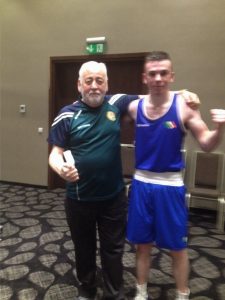 Kieran Molloy claimed his third win in as many days at the Feliks Stamm multi-nations in Poland today.

The Galway welter beat Armenia’s Garnik Papikyan in an all southpaw 69kg semi-final to guarantee himself at least silver in Warsaw.

Molloy, using his backhand to great effect in each round, took all three frames en route to victory, his best moments coming near the end of frame two when he launched three very effective attacks.

Papikyan had his moments early on in what Irish team manager Francis Keeling described as a very cagey contest.

“It was a very tactical bout. Kieran boxed excellently, very clever, good hand speed. That’s his third win in three days and he’s getting better with each fight,” he said.

Myles Casey was also in action today but lost on a unanimous decision to Polish bantam Jaroslaw Iwanow at the last-four stage. Just five boxers entered in the 56kg class and Casey will be bringing home bronze.

Molloy meets a second Polish opponent in Saturday’s final. The host nation are using more than one boxer in each of the weights at the 34th edition of the tournament.