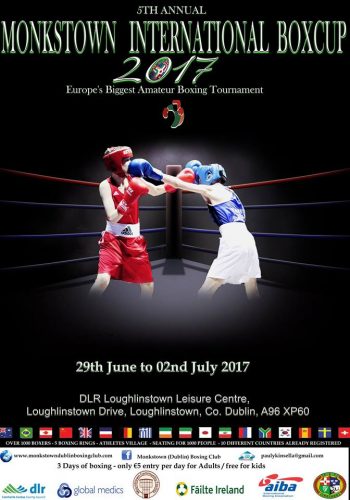 The Monkstown International Box Cup continues to grow from strength to strength.

This year’s tournament will feature 788 boxers from 114 clubs from throughout the world and will also welcome its first teams from Asia, India and Mongolia.

Forty clubs from England are in the hat along with five American sides.The 2017 edition of the International Box Cup runs at the DLR Leisure Centre in Loughlinstown in Dublin from Thursday 29th June to Sunday 2nd July.

The tournament, which is proudly supported by the DLRCC (Dun Laoghaire Rathdown County Council), IABA (Irish Athletic Boxing Association), DLR Leisure and sponsored by GlobalMedics.com, has grown ‘tenfold’ in size since its beginning in 2013. The original tournament in 2013 had 75 boxers, according to organisers.

He said:“The tournament committee sat down last September and worked out the tournament dates/schedules and other fundamentals.

“In November, we then sent out the invitations to every club that has attended before. The tournament has a great name, with many boxers going on to compete at the European & World Championships.

“A lot of interest has come from all around the globe.Our Committee of volunteers is so hard working, we have two separate committees in the process (Fundraising Committee & Parents Committee which looks after meals etc for all the boxers). It’s a massive undertaking from the club, but we absolutely love every bit of it, and we are well prepared and can’t wait for the 29th June to get started”