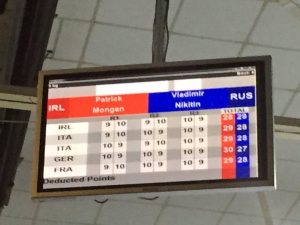 Galway lightweight Patrick Mongan opens his title defence against Dillon Duffy in the first of the 60kg Elite quarter-finals at the National Stadium on Friday evening.

Evan Metcalfe and Adam Courtney meet in the curtain-raiser for the 2008 Elite Championships in Dublin.

Mongan scored a stunning win over Russia’s Vladimir Nikitin in a Round Robin tournament at the National Stadium last March just a few weeks after beating George Bates on a split decision to claim his first Elite belt.

The Connaught lightweight posted a 4-1 split verdict over Nikitin who was beaten by John Joe Nevin in the semi-finals of the 2013 European Championships in Minsk.

The Russian athlete, a World silver medallist, earned a controversial decision over Michael Conlan in the last-eight at the Rio Olympics with at least bronze up for grabs.

Speaking to www.iaba.ie after the three-rounder  with the Olympic BC man last March, the Olympic bronze medallist admitted that Mongan was a very tough opponent and that he believed that the Conlan fight was “close”.

Meanwhile, 15 bouts will be decided Friday, with former Elite champion Dean Gardiner and Thomas Carthy going head-to-head at super-heavy in the final contest on the card.

Friday’s weigh-in times – 8am to 9am and 12pm to 1pm at the National Stadium.