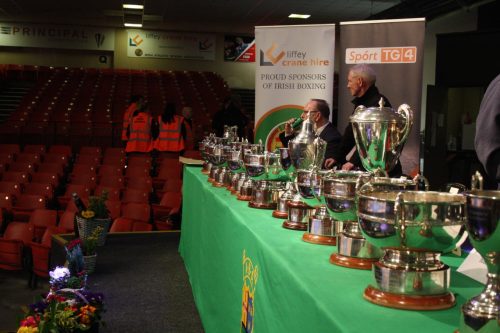 Over 900 Irish Senior/Elite titles have been claimed since the advent of WW2 at Dublin’s National Stadium.

The Stadium was officially opened in 1939 on Dublin’s South Circular Road as the first purpose-built boxing venue in the world.

Eight inaugural belts were claimed at the Stadium the following year.

Wexford’s Jim O’Sullivan and Dublin’s Ken Egan are the most prolific with ten belts each; Egan securing ten successive gold medals on the bounce at the flagship tournament of Irish boxing.

Dublin’s 2018 World Elite titlist Kellie Harrington and Antrim’s Michaela Walsh are closing in on the ten-time titlists, however.

It appears that Bernard Dunne, the IABA High-Performance Director, and Terry Carlyle were the first two boxers to be involved in the dreaded countback, Dunne getting the nod on accepted scores after a 7-7 tie in the 1999 featherweight final.

The Senior/Elites has been run three times in the same year to facilitate Olympic qualifiers and the inaugural women’s edition began ten years ago.

The first Championships was decided at the Abbey Theatre in 1922 and  various other venues up to 1939, the year Irish boxing officially opened the door to its permanent home.