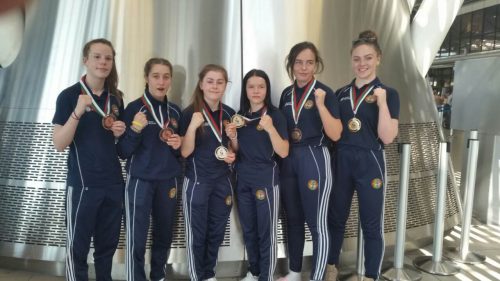 Friday’s U/18 showdown between Caitlin Fryers and Jessica Clarke is evenly poised at 1-1 going into the third head-to-head between the talented pair.

The Immaculata BC and Cardonagh BC stand outs clash over three rounds for the flyweight  belt in one of 19 finals at Dublin’s National Stadium.

Clarke has previously beaten Fryers in the Ulster Championships but Fryers evened the score at the Irish Nationals.

Fryers claimed World Youth bronze last year and is included in an 11-strong Irish squad for next month’s World Men’s and Women’s Championships in Budapest, Hungary.

“She is a really hard trainer and a great asset to the club. She is a great kid, working over the summer and is hoping to start university at Jordanstown soon,” added Meli.

Fryers will be aiming to finish out her last year in Youth boxing on a high-note before targeting Senior belts.

“We were talking the other day and she was saying she would like a crack at the Intermediates before going into the Elites,” said Meli.