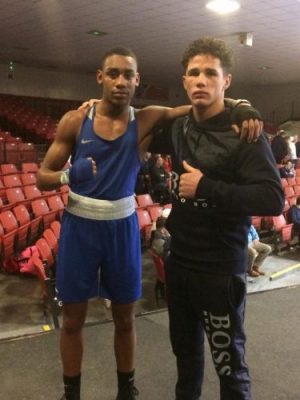 Mike Mongan wants to see Olympic BC pair Gabriel Dossan and Edward Barrett, pictured, carry the momentum of last weekend’s wins into tonight’s National U/22 and U/18 finals.

The Galway duo meet Chris O’Reilly and Adam Dempsey in the middleweight and light-heavy deciders at Dublin’s National Stadium.

Dossan, a World and European Youth medallist, beat five-time European medallist Johnny Joyce on a unanimous decision in the last-four.

“Both lads were exceptional last weekend and are looking forward to carrying that momentum into this weekend’s finals,” said Olympic BC and Irish coach Mongan

“Gabriel’s performance was clinical, tactical and one of the best of his careers. He stuck to a game plan set out to make use of his long range, speed and agility.

“Brilliant performances by both (Gabriel and Johnny) boxers, showcasing their boxing abilities and attributes that could have easily been seen as an Elite final.

“Edward, in his first year at U/18 level since winning the Youth 2 National title last year, showed that he’s well capable of mixing it in the older age group by winning his quarter-final.”

Pat McDonagh, coach at Mayo’s Geesala BC, has two sisters, Aoife and Ciara Ginty, between the ropes versus Tiffany O’Reilly and Ciara Sheedy. Ciara Ginty is a former World Junior champion and Olympic Youth finalist.

“It’s all about how you perform on the day. Both girls are on familiar terms with their opponents as they’ve met quite a few times. It’s a great opportunity for Aoife and Ciara,” he said.

The IABA are using the tournaments as part of their selection process for March’s European U/22 Men’s Championships and April’s European Men’s and Women’s European Youths. Boxing begins at 6.30pm tonight and 12pm tomorrow.