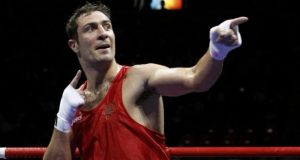 The role of the Commission is to advise the OCI Executive Committee on all athlete related matters and to ensure that the voice of Irish athletes is heard in all future OCI decision making. David Gillick as chair of the Commission will now sit on the board of the OCI as a  full director.

Speaking following his election as Chair of the Commission David Gillick  said; “It’s an honour to have been elected as Chair of the Athletes Commission and I look forward to being a strong voice for athletes on the OCI board over the coming four years.  The new Board of the OCI has a rigorous reform agenda to deliver significant change in the organisation and to put the athlete at the centre of all that it does. I look forward to playing my part in driving that athlete centred change. We now have a strong Commission comprising a diverse range of skills and I look forward to working with the team to put a programme of work together. ”

The following members of the Athletes Commission attended the meeting on Tuesday 27/6/17:

The Commission will meet at least 4 times a year and it will agree its programme of work at its next meeting in late July 2017.

Photos will be issued by Julien Behal Photography